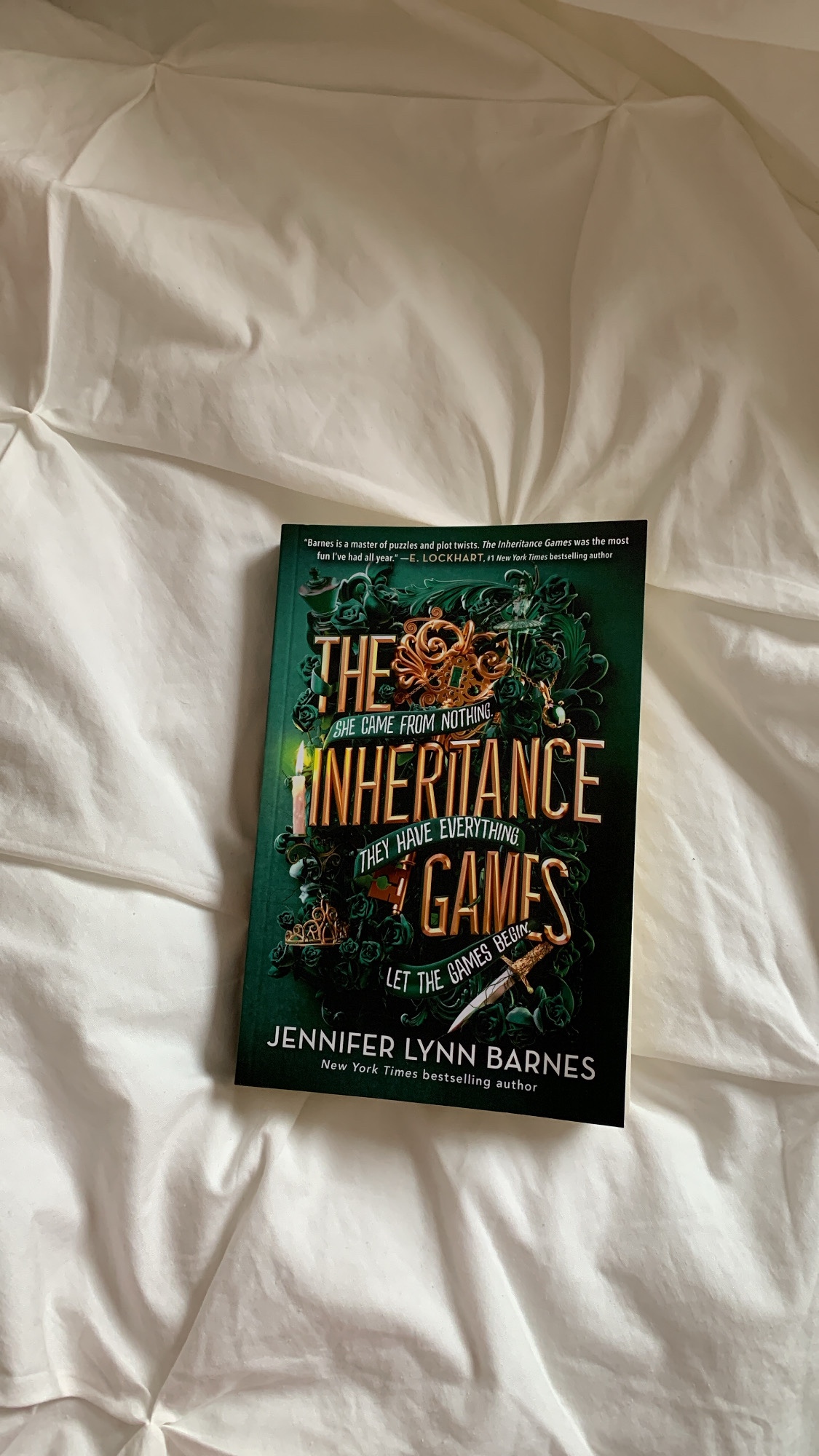 Book #8 of 2022 was a good one. I think this one’s taking the lead! It might actually be better than “People We Meet On Vacation”. This could be a controversial opinion, but “The Inheritance Games” took me places where I’ve never gone before, you know?

I also could have read it in one day (yes, it’s that good).

Imagine being a senior in high school and not having a father, a mother, or any money at all. You don’t even have a home! You’re sleeping every night in your car with postcards of destinations you dream of travelling to. Then one day you get called to the principal’s office to meet the grandson of the richest man in Texas/one of the richest men in America: Grayson Hawthorn. His grandfather (who you never knew existed), Tobias Hawthorne, is a billionaire. He recently passed away and has requested that you be present at the reading of his will. Why? Because you’ve just inherited everything.

Honestly though, what would you do if you were randomly picked to inherit billions from an old man you didn’t know? I’d freak out! I’d make sure it wasn’t a prank, that’s for sure. What our protagonist, Avery Grambs, finds out is that Mr. Tobias Hawthorne was a man of many mysteries. He communicated through games and puzzles, and including Avery in his will was most definitely part of another puzzle that they were going to have to solve. I think all of the puzzles were a big reason why I enjoyed reading The Inheritance Games. It made me think and kept me wanting to know what was next, which made me incapable of putting this book down. If you love a mystery and being taken for a ride, you’ll love this book! I felt like I was alongside them as they tried to solve each clue/riddle. By “they” I mean the Hawthorne boys + Avery, which leads me to another few reasons (four reasons to be exact) why I loved this book.

The Hawthorne men. The grandsons of Tobias Hawthorne. In order from oldest to youngest, there’s Nash Hawthorne, Grayson Hawthorne, Jameson Hawthorne, and Xander Hawthorne. Their family dynamic is intoxicating. I love them so much. They have the most fun dialogue in the book. Each of them has their own personality with unique qualities. I think it’s safe to say that their handsome but on top of that, they’re smart. I love men with brains lol.

The Hawthorne House. Or I guess the proper term is “mansion”. It sounds like it should be a home classified as something all on its own because this house is crazy huge. It’s full of hidden passageways and dark secrets. Think closets that have hidden doors. Fireplaces with a hidden passageway that opens at the pull of a candlestick. There are floors that open up into completely new rooms. THE LIBRARIES. There are multiple libraries in this novel and I couldn’t handle it. My dream is to have my own library, and the Hawthorne’s have FIVE (at least)! As you read the book, you discover that there’s a whole other wing of the house, then another wing of the house, and so on. I’m hoping this book gets picked up and adapted into a film because I would love to see how they bring the Hawthorne mansion to life.

Another reason why I loved this book is that I feel like this touches on a different kind of Cinderella story. Avery didn’t have much and overnight she had everything (including her own football team and a number of airplanes). I think what makes those that love this book love it so much is the fact that it makes you wonder, could this happen to me, too? Obviously not. I mean, I wish! But it’s probably not likely, let’s be honest. It does let you dream of the possibility though, and who doesn’t like dreaming? (Btw I’m leaving out the part where she has so much money that people are shooting at her on her own property and needs like, heavy security lol – not really the dream)

Now it wouldn’t be the perfect book for me if there wasn’t some kind of romance to talk about. This book is nothing short of romance. It’s got a LOVE TRIANGLE. I’ve never been sure if I like love triangles. Personally, they sound a little messy to me. But Avery gets herself caught in the middle of two of the Hawthorne brothers. The two that seem to have a history of loving the same girl when they couldn’t be more different. It’s Grayson and Jameson. Grayson is super serious/realistic and Jameson is everything but serious. I’d say that the love triangle is more established in the second book than in the first, but let that encourage you to continue the series! The third book comes out in August – I can’t wait!

Okay, I could go on and on about things I loved about this book. But I’m going to say one more thing and leave it at that. I really hope I’ve convinced you to read this by now! But if you’re someone that values getting through a single chapter in one sitting, or just likes the satisfaction of completing something, you’ll love this. The chapters are so short. You can read like, 5 chapters in one sitting. You’ll honestly feel so good about yourself. I mean, I at least did ha-ha. Because I finished so many chapters at a time (this could be my competitive side showing), I just wanted to keep reading and see how many more chapters I could read (which is probably why I didn’t go to bed until 2AM lol)!

Now I wrote down that I wasn’t pleased with the ending of the first book. But now that I’ve read the second, I understand why she did what she did. I was just upset that there wasn’t as big of a reveal that I had hoped for at the end of The Inheritance Games. I also read a few reviews on GoodReads and a lot of people said that they didn’t like these novels because the story was a little too much like Knives Out. I haven’t read Knives Out (Is it a book? Or just a movie?) so now I’m wondering if maybe I wouldn’t be as impressed if I had. Should I read Knives Out? Have you read it? Let me know!

Max is Avery’s best friend in the book. She has very strict parents that take away her phone a lot. She also can’t swear, or curse, or whatever, so she makes up her own curse words. It’s quirky, but sometimes annoying. I also found her to be not that great of a friend. I guess she does the best she can with what she has. With such restrictions, it’s probably hard to be there for Avery in the way that she would like to be. I don’t know, I just felt like that relationship was lacking in some way. I don’t know whether to blame Avery for being too caught up in her own mess, or Max for being unavailable.

There’s also the Emily plot line. She sounds like a nightmare of a person, but everyone adored her. I’m just not a fan of manipulation. I don’t want to get into this in too much detail, but I’d like to know other people’s thoughts if you’ve read this book. Do we like Emily? Because I feel like she’s caused a lot of pain and trauma for a lot of people.

To summarize, I LOVED THIS BOOK. GO GET IT RIGHT NOW. I want to talk about it with someone! Someone read it and get excited about it with me! You have no idea how much I adored these books and reading them was an experience that will stick with me. I love reading again, and I think this series really helped me with that. I think Jennifer Lynn Barnes is a fabulous storyteller and I’m going to look into reading more of her books. Like I said earlier, I could have sat in a chair and finished this book all in one day. This won’t come as a surprise after everything that I’ve said, but I rate this book 5/5 stars!

I hope you enjoyed this book review! I love book recommendations so if you have any, please leave them in the comment section below!