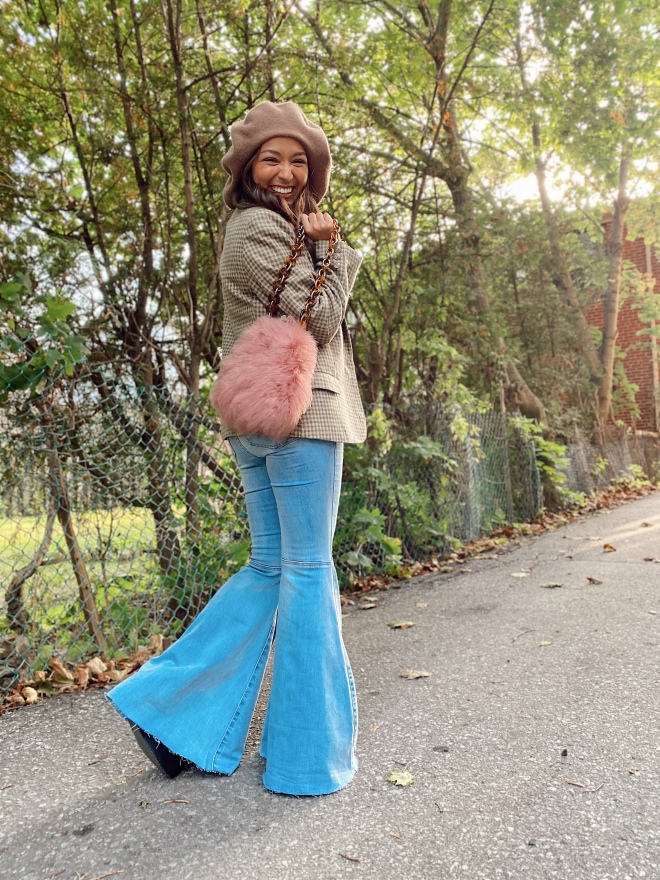 Dreaming of Me in Paree

If you know me, you are well aware that I am obsessed with visiting Paris one day. I know it sounds tres cliché, but I don’t care. I’ve watched Emily In Paris on Netflix about four times now, and I just wish, and hope, and dream that maybe I could have that experience someday. 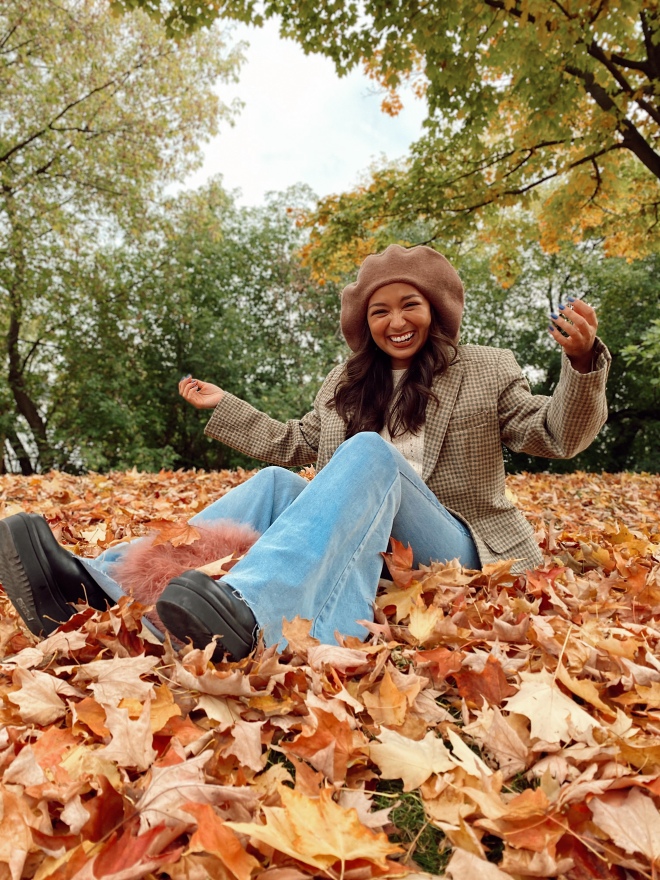 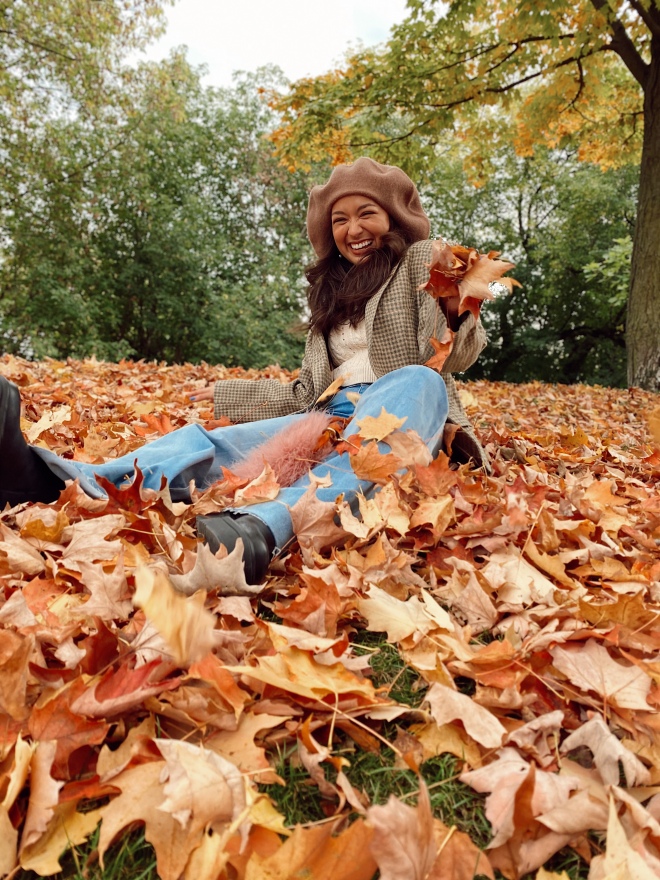 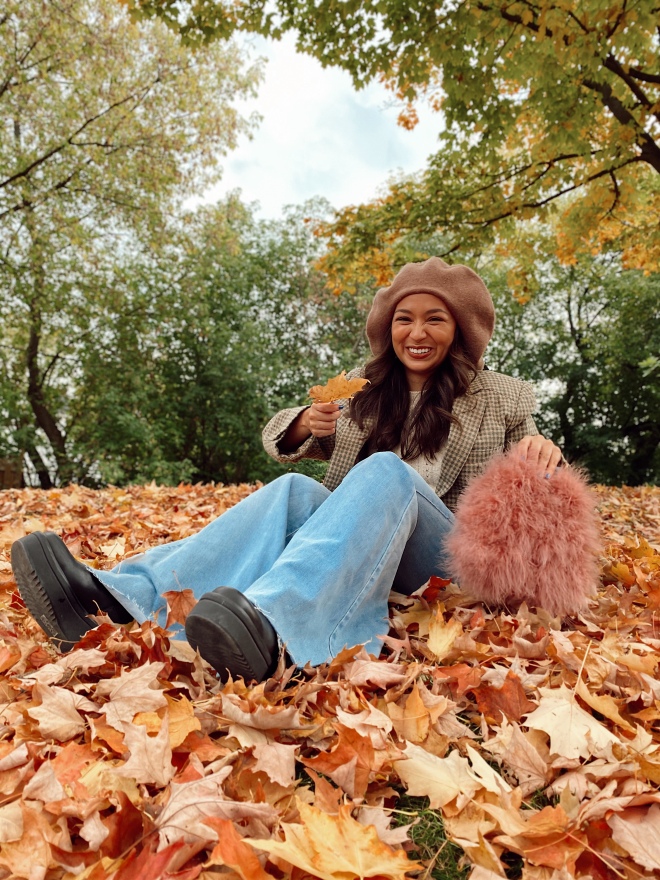 Anyways, if the beret doesn’t give it away, I am clearly influenced by this show. There are a lot of mixed reviews about it but I love it. I can’t wait until season 2. I mean, THERE HAS TO BE A SEASON 2. Darren Star, the creator of Sex And The City, also created this show! And Patricia Field, the costume designer/the woman that clothed Carrie Bradshaw, is also the woman that styled Emily!!! I don’t know about you but I am thoroughly excited by it.

For this outfit, I wore these “Just Float On” flare jeans from Free People. Someone returned a pair in a Short length at work and I obviously scooped them up right away. I unfortunately still needed to cut a few inches off (God, I’m so short lol) but they look great now! On top, I wore a cropped cable knit sweater (also from Free People) and a houndstooth (I think?) blazer. I know houndstooth is normally black and white but I swear this print looks similar. It could also pass as plaid or a check print. Let me know what print you think it is in the comment section! This blazer was thrifted from Value Village and it’s been one of my favourite finds. It fits so well and it goes with so many things in my closet. To tie in with the neutral tones, I wore a camel-coloured slouchy beret that I also picked up at Free People. It’s so oversized and I’m kind of obsessed with the way it hangs. I don’t have a beret like it! And if you know me, you know I have a full-on collection of berets lol. I’m not kidding about Paris, guys.

The shoes I chose for this outfit were my black platform chelsea boots that I recently picked up from Little Burgundy. I think I talked about these boots in my last outfit post but they’re from the brand Vagabond. I love them and as you can probably tell, I can’t stop wearing them. They offered the perfect height I needed to wear these jeans. 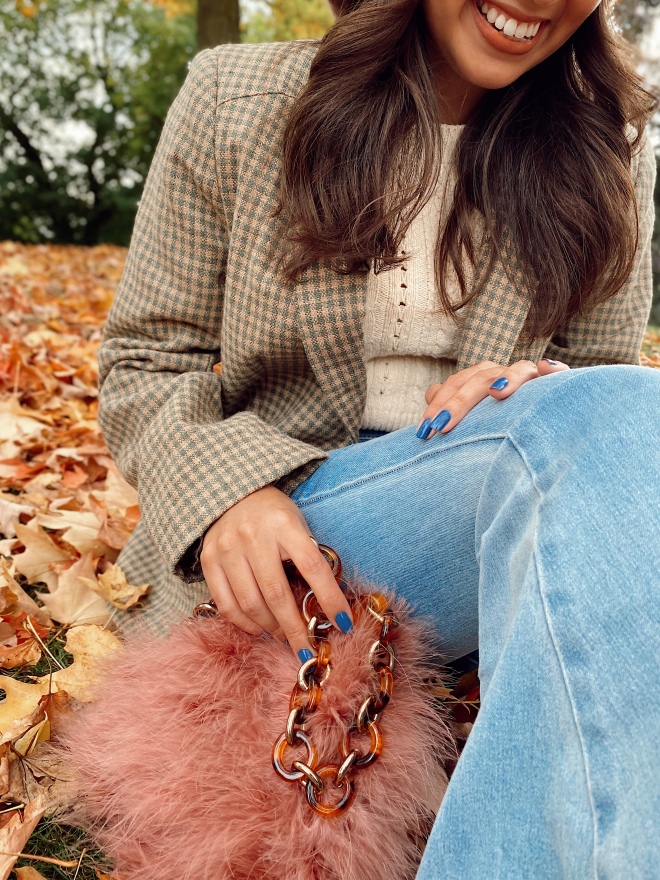 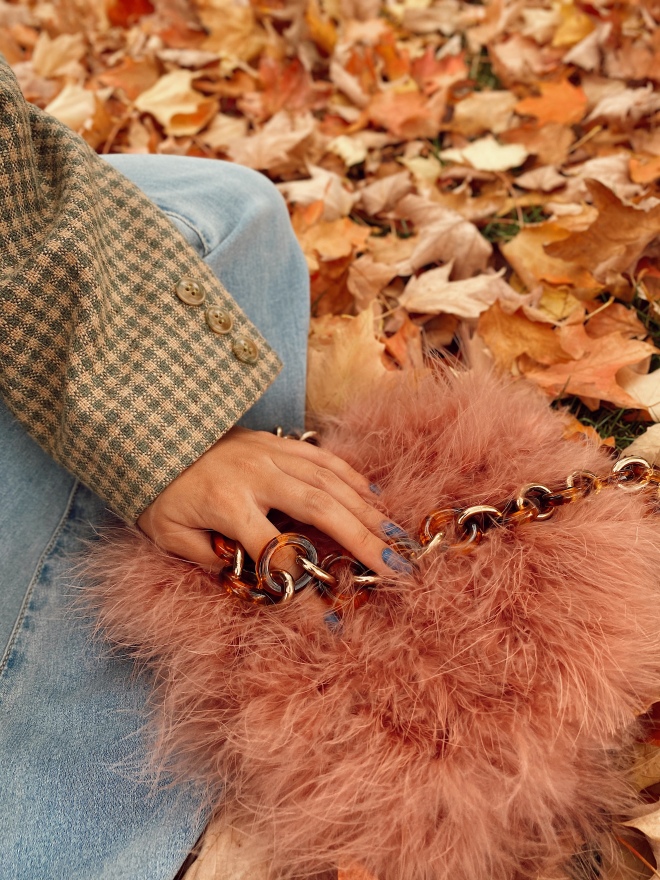 The final piece to this outfit is this purse from TOPSHOP that I’ve held onto for a couple years now. I don’t wear it often but I keep it around because it’s so unique. It’s made with pink feathers. It has a tortoiseshell strap. It’s one of my favourite bags in my collection because I’ve never seen anything like it, and I kinda sorta see Emily wearing it in Paris ha-ha. 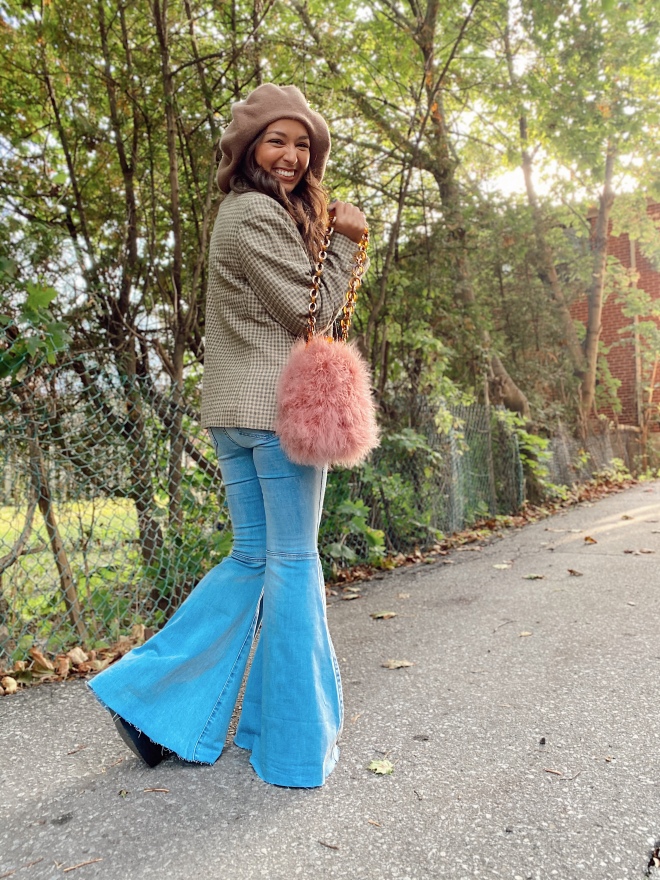 Alright, there’s another outfit for y’all! I hope you enjoyed it. If you want to see more Emily In Paris -inspired outfits, let me know in the comment section below! I’m not gonna lie, it’s definitely something I’ve thought about. Or maybe just Paris -inspired looks? I don’t know about you but during this pandemic where we’re mostly self-isolating, dreaming of being in Paris and watching Emily In Paris has been such a great escape. I think that’s why I love it so much. It just gives me a reason to take a break and forget all about the stressful and terrible things that are going on right now. If you need to escape and Paris is something you also dream about, I highly recommend watching this show!

i feel like me again 😌💅🏼🧡✨
because i’d do anything for a vacay rn ☀️ #currentlyreading
snow way these were taken today 🌨🌨
super excited to shop for the apartment this weekend 😁🛒🏡 - what are your weekend plans? #happyfriday
“books i read in 2021” is now on tinyintoronto.com! 💻📚✨ (link in bio)
balaclava appreciation post 🧡🧡(handmade by me 🥰)
Loading Comments...
%d bloggers like this: