a woman in the window taking a picture of “the woman in the window”? am I funny or am I funny? 😂 #currentlyreading
#TGIF - I’m so excited to be off this weekend!!! also: this is the best thrift find of 2020 so far jusssayyyinnn 🥰
cozy town 😌
IM GOING TO BE ON A BEACH IN 20 DAYS 😭❤️ #cantwait
love my new #thrifted bag 🥰 (a vlog of my thrift trip yesterday is coming soon!!!)
survived my first yoga class this morn! ✌🏼

Hey friends! It’s that time again! (Do I say this too much??) We’re two weeks into August already (I am sooooo sad to see summer go by so fast!!!) and that means it’s time for me to share what I loved during the month of July. I have a lot to share. A good mixture of things! TWO BOOKS?! That’s pretty good for me! I also have some shows, food, jewelry, and more!! Here they are!

The Farm by Joanne Ramos – This is the first book that I finished during the month of July. I loved this book. I was in the process of writing a separate review but I honestly couldn’t put it into words. I liked it so much that I couldn’t even properly describe it, and I think my description wouldn’t have done it any justice anyway (much like this one I’m about to try to do). It’s about a Filipino immigrant trying to make a life for herself and her daughter in America. There’s a little Filipino community of women that are nannies or nurses in retirement homes. I found this to be very relatable because my mother is from the Philippines and a number of her friends are nurses and work in retirement homes. Some have also been nannies. Jane, the main character, is convinced to join a “farm” to make a lot more money to support her child. The farm is this really nice and expensive facility in the middle of nowhere where women stay for 9 months to be a surrogate mother for rich people or people that are unable to carry their own children. There are a lot of twists and turns that I’m leaving out because I’m really bad with surprises/keeping a secret. There’s just a lot of drama. Jane isn’t told who’s baby she’s carrying and there’s pressure that she might be carrying the baby of one of the richest families in the world. This makes the other women resent her a bit and doesn’t make living at this facility (away from her daughter) any easier. I highly, highly recommend you go pick this up and read it! Like I said, my description doesn’t do it any justice but I enjoyed it so much!

Euphoria – I finished this show a few days ago and I loved it! It was very real and eye opening. I know it’s exaggerated/dramatic but I think it’s definitely something everyone should watch! It makes me a little concerned for my little sister growing up during this generation because of all of the crazy things these high school kids get up to, but they’re not lying. We all know what happens in high school, right? It’s also quite artistic and creatively shot! You can watch it on HBO/Crave. I have to admit that I was a little disappointed with the season finale. I feel like it was a little boring and not the kind of ending I was expecting, but don’t let this put you off of starting it! It’s still an interesting ride and I hope the following season starts off a bit better than how the last one ended!

Essie polish in the colour “Take The Lead“ – I found my favourite blue nail polish last month. “Bikini So Teeny” is a close second but this one is so cute that I’m not even mad at it for chipping so easily. I wore it maybe 2 out of the 4 weeks of July. It’s called “Take The Lead” and it’s such a beautiful sky blue and I love the application of it. It’s kind of a matte finish so I think that’s why it might chip more than others. However, I have a pretty good top coat that makes it shinier and last a little longer. I believe it’s a limited edition colour and belongs to one of the collections they’ve launched this summer. You might still be able to get your hands on it. I got it at Shoppers Drug Mart! Me wearing the polish: 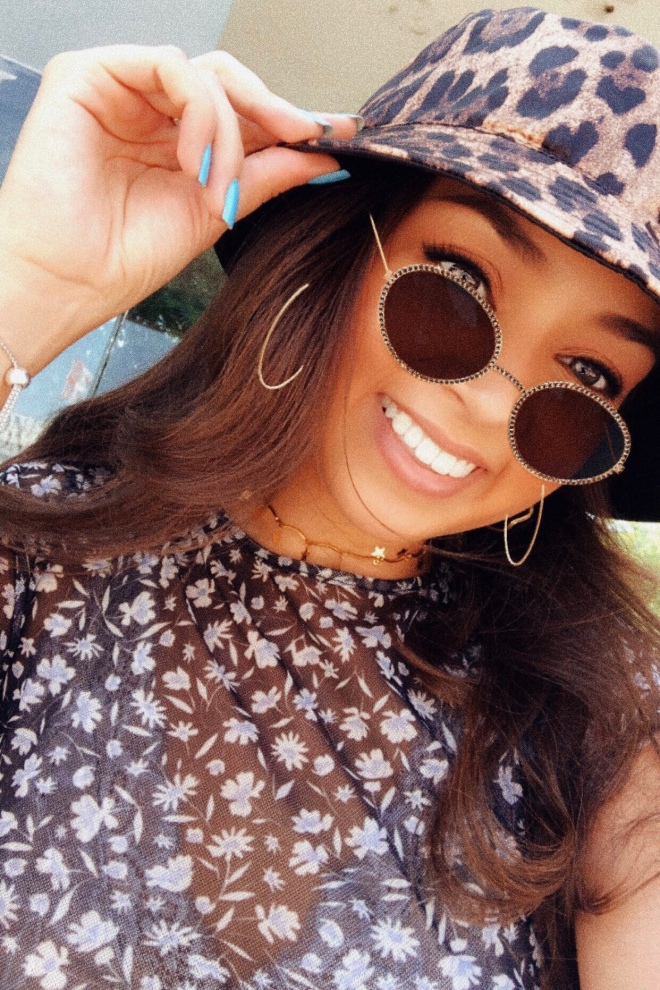 Montréal – I went to Montréal with my best friend and roommate last month. Molly and I planned to see Katya back in April and decided to make a little trip out of it! Katya is a drag queen that we are both obsessed with. Her and Trixie Matel are our faves! In Montréal we ate a lot of good food and shopped a lot. It was so much fun even though we were there for only 3 days. It was a cute little escape! One of my favourite things that I purchased during the trip was this rainbow bracelet that I got from this cute boutique called V de V. I love that it fits like my Pandora bracelet and I also love how it brings colour to my everyday bracelet combination. It’s so pretty!!! For food, we ate poutine (obviously), the best ramen we’ve ever had, and a huge ice cream/waffle experience. I’ll try to find some photos and share them below! 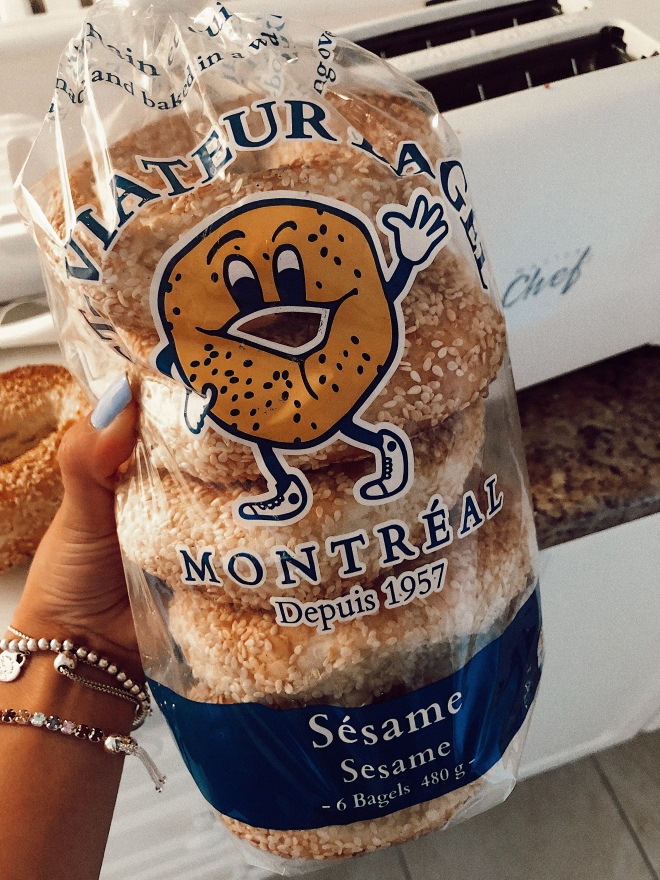 Thrifting – Montréal rekindled my love for taking people’s old clothes and styling them in a way that you wouldn’t expect! I like the challenge of taking these more affordable items and turning them into something that fits today’s trends! Let’s be honest, trends only last for so long and I really can’t afford to waste my money on them. Why spend a bunch of money on a trend that only lasts a few months/a season? There was this one place called Eva B’s in Montréal that had 3 floors of SO MUCH STUFF. I’ll admit that a lot of it was junk. You really had to dig but that was the thrill of it all! We were definitely in there for a long period of time and walked out of there with some awesome treasures, like my new black cowboy boots!

Pastel colours/tie dying: Pastels have been my favourite colours to wear this summer. I love how they look with a tan. I also have been loving pastels in the form of tie dye! My boyfriend was sweet enough to get me a tie dye kit and I’ve been experimenting all month. I’m still trying to nail it. We’ve been trying this method with ice that lightens up all the colours, but it also unfortunately blends them together a little too much. I’m committed to mastering it this month though, and I’ll share the best pieces once I’ve done it! Here are some photos of the process and my best shirt so far: 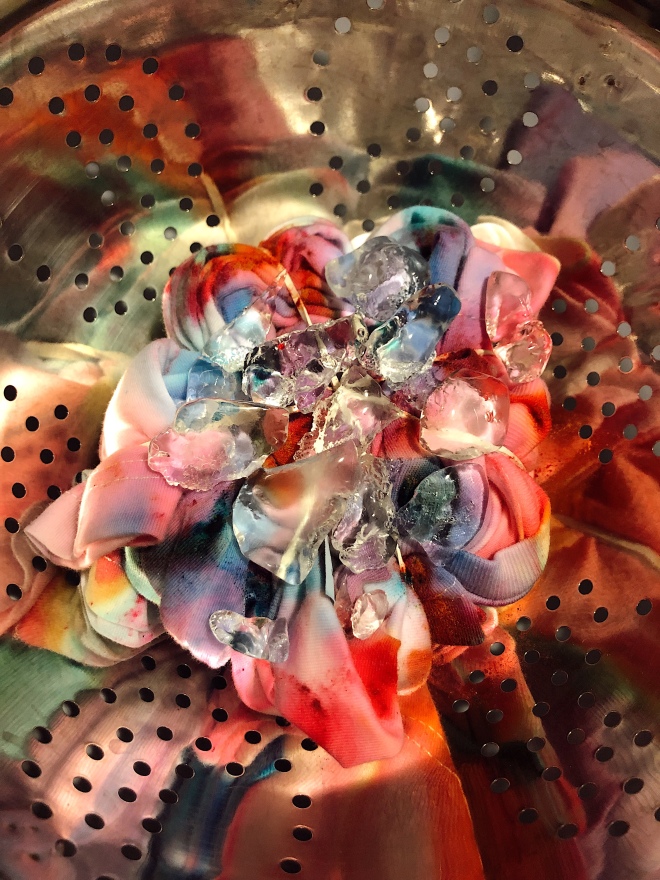 Stranger Things – BEST SEASON YET. They weren’t lying!! I’m sure you’ve all seen it. If you haven’t yet, you need to get on it! I loved seeing all the characters growing up and maturing. I cried at the end. It was pretty bad. I honestly have no clue what to say without giving anything away. I just really enjoyed it and I think they’re going to have a tough time trying to top this one! For those of you that have seen it all, what was your favourite episode? Who’s your favourite character? I’m a big fan of Steve lol.

Sapiens by Yuval Noah Harari – I JUST finished this book before the end of the month. I challenged myself to read something that wasn’t fiction. Something better for my brain! I thought that learning about the history of humans would be educational and it was that and more! I learned a lot of interesting things and I think I want to continue to read books that make me think a bit more. It’s been a while since I’ve been in school but that doesn’t mean I have to stop learning, right? There’s still so much to learn and I want to be more active in terms of understanding new things, so I’m going to read more nonfiction as a start! If you haven’t read this book, I’m going to warn you and say that it is quite the challenge and there were times where I wanted to just give up/never go back to it. I am however the most stubborn person you’ll meet so I couldn’t let myself quit. It’s just really wordy and you find yourself getting lost if you aren’t familiar or used to reading information like this. At times I felt like I was reading a textbook but please don’t let this keep you away from it! The way it’s written is also really lighthearted and easy to understand for the most part. It’s probably the most easy-to-read “textbook” around! And why wouldn’t you wanna learn about humans?! It’s crazy how we’ve evolved and I think you should find out for yourselves!

Crafts/jewelry making: To piggy back on the whole tie dying thing, I’ve also been making a lot of my own jewelry. I’ve been really crafty this month if you can’t already tell lol. I mention wearing a lot of my “pieces” in my last post but I’ll give you guys some close-ups on what they look like. Some of you aren’t going to like them. They look like something a kindergartener would create but I think it’s trending right now! The beads you can get anywhere and they’re fun to play around with. I got a lot of inspiration from necklaces that I’ve seen on Instagram. I wanted to just buy one of them instead of going out and making my own but they’re SO EXPENSIVE. I don’t know how they can demand for so much money when they look the way they look! Does it make sense to you? Maybe we’re paying for the creativity? Anyways, I couldn’t justify buying a necklace from these people so I decided to go to Michael’s and take a whack at it myself. Here’s what I made! 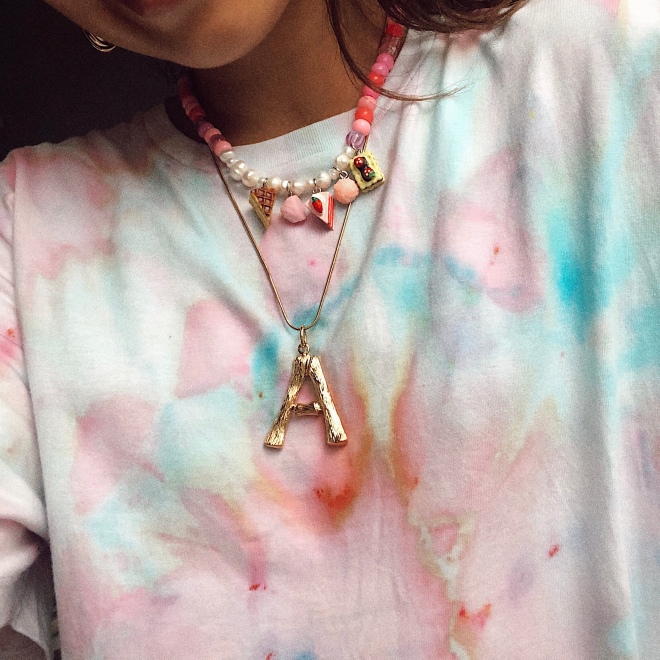 So this blog post ended up being a lot longer than I expected it to be. If you’ve made it this far: you a real one. Thank you for taking the time to read about what I loved and enjoyed last month!